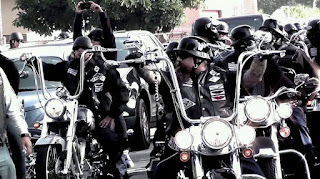 Feared bikie boss Toby Mitchell has avoided Christmas behind bars over an assault on his birthday weekend after being granted appeal bail.

The Mongols president was jailed on Tuesday evening for two months just hours after his arrest over a drunken bar fight in Echuca last month.

However, the 47-year old will now be cut loose after his barrister Damian Sheales successfully argued for appeal bail just minutes after the sentence.

Toby Mitchell is back behind bars after the Christmas Grinch, aka Victoria Police, busted him over another alleged assault.

Mitchell, who stripped off his t-shirt to reveal his tattooed torso during a videolink before the Melbourne Magistrates’ Court on Tuesday night, will now be forced to stay off the booze and pay a $10,000 surety until his County Court of Victoria appeal next year.

Mitchell had no doubt been keen to resolve the matter rather than spend time in custody on remand waiting to contest the charges.

But Magistrate David Starvaggi threw the book at him, attempting to ruin his likely plans for a Christmas turkey at home with his bikie goons.

Mr Starvaggi jailed Mitchell for two months, bringing on the near immediate application for appeal and bail.

The court had heard Mitchell twice slapped a random bloke he had been drinking with for at least two hours at the American Hotel in Echuca – on the border of Victoria and New South Wales.

CCTV footage retrieved by police showed Mitchell in the company of a female when he lashed out at the man with a left fist to the face after a drunken argument.

When the man returned seconds later Mitchell slapped him to the ground and left the pub, but not before asking the manager to erase the CCTV footage of the incident.

Mr Sheales told the court the assault had been ‘garden variety’, with the victim not filing a complaint and simply getting back up to his feet and leaving the pub.

Mitchell pleaded guilty to common law assault and failing to assist police when they later asked him for access to his mobile phone. Mitchell had earlier shared photos and videos of his trip to Echuca with the Mongols.

The former kickbox had taken to Instagram to show off his flashy birthday cake while partying with his bikie mates in the country Victoria town.

He also posted footage of gang members drinking shots in the street and riding around town on their motorbikes.

Mitchell’s barrister Damian Sheales claimed Mitchell’s victim had himself been a drunken convicted criminal who ought have walked away after copping the first slap.

He has now indicated Mitchell will appeal both conviction and sentences, effectively having another roll of the dice to get Mitchell off in a higher court.

Mr Sheales claimed the entire police case had been based on CCTV footage, with no real witnesses providing evidence.

The matter will now head to the County Court of Victoria on December 22.

It will likely take more than a year for the appeal to be heard as the court struggles to catch-up on a Covid-19 backlog.

Just hours before his guilty plea, Victoria Police proudly released video of their own featuring Mitchell in the form of detectives escorting him out of his Southbank apartment in chains.

Mitchell was originally charged with affray, common law assault, unlawful assault and failing to provide an access code for his mobile phone.

Mr Sheales had argued it was Mitchell’s ‘infamy’ as a bikie figure that had once again caused him to get into trouble with a stranger. He told the court the man had been rude to Mitchell after hours of drinking with him.

Mitchell denied he had punched the man, claiming he simply slapped the drunk.

Mr Sheales claimed Mitchell was only charged after police caught onto the incident through the grapevine and asked the manager of the hotel for the CCTV, which he had not deleted despite the bikie’s request.

During the subsequent appeal, police alleged a goon later attended the pub and asked the publican to again erase the CCTV. That man, police claimed, was likely to be charged himself over the coming days.

The court heard Mitchell had initially chosen to deal with the charges promptly with a guilty plea in an effort to spare the court’s time and money. Mitchell had hoped to be free for Christmas with a simple fine despite numerous prior convictions for assaults.

After making the arrest, Echo Taskforce Detective Inspector Graham Banks issued a warning to other bikies who may have plans to punch on over the festive season.